Diverter and Kickout Repair and Installation

Diverter and Kickout Repair and Installation

There is a major misconception by some that by installing a diverter or kickout flashing, then skimming and recoating the wall, that the problem is solved and leaks are eliminated. Water gets behind the stucco at this connection for more reasons than the lack of a diverter flashing. We look at homes every week that have diverters or kick out flashings, and they still have the staining and cracking in the stucco wall from the roof eave down the wall (picture of failed roof to wall connection with diverter). To fix this connection correctly requires more than simply adding a diverter and skimming and recoating the affected area of the wall. Such inadequate remedial action will only serve to conceal the problem for another 3 or 4 years. Often times this connection doesn’t cause a leak into the home that is noticed by the home owner, it’s just a small amount that’s absorbed by the wall sheathing and insulation when it rains or snow melts off the roof. This small amount of water is then trapped by the moisture resistant properties of the stucco and eventually rots out the wood framing.

RAM Builders’ work methods were designed by building scientists and engineers that we worked with as we solved these problems for some prominent builders in Utah, Texas, and California. Simpler methods were tried but as we water tested these and checked them with a moisture meter for leaks we found they failed. Most contractors that try to fix this connection build their diverter flashings on the job by taking a step shingle and cutting and bending it into a diverter, without sealing the cut made in the step flashing by soldering the joint, this will allow the diverter to fail. Several other steps have to be taken at this connection to keep water that travels on the drip edge, fascia and roofing from being directed into the home. This requires removing the soffit, fascia, and stucco from around the eave, so that the 2x fascia board and drip edge can be cut back. Then at the roof to wall connection above this eave, the stucco above the roof line is removed so that the shingles and underlayment can be redone. With out doing this, the eave to wall connection will probably fail again, and as it did the first time. It may be years before the problem is noticed and by then it will have dry rotted out the wall again. 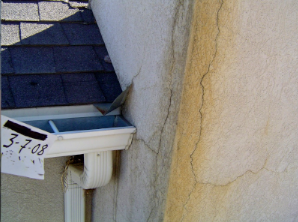 The metal “diverter” as shown here above the gutter downspout is intended to divert water that runs down the roof away from the stucco wall. The one shown above, due to incorrect installation is not doing it’s job. 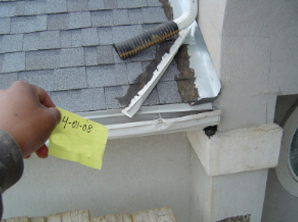 A failed attempt by others to divert water away from a roof to wall connection. The water causing their problem is traveling behind the stucco, not only on the surfaces.

Dry rot above an entry door caused by a failed roof to wall connection.

STUCCO REPAIR OR EXTERIOR REMODELING QUESTIONS? PLEASE GIVE US A CALL.