As housing moves up the benches, into the canyons, and further west into the valley, large amounts of rain are driven by high winds and moisture gets pushed behind exterior housing finishes. Stucco systems, brick, and siding exteriors have experienced unprecedented failure. “One coat” stucco systems like those now commonly found in Utah, can actually hold moisture, and combined with poor workmanship can experience catastrophic failure.

When compared to brick or exterior siding, a stucco system requires the same care and attention to quality & workmanship to seal out the elements, specifically at window connections, and roof-to-wall connections. With a “one coat” stucco system however, saturation and system failure through the field (i.e. open areas without architectural penetrations) can occur and serious problems are often well hidden.

The concept behind a stucco system is minimal saturation, and rapid dry out and drainage times. In thicker three coat systems water enters the system quicker, however, it also drains with gravity out the bottom of the system, drying it out quicker between storms.

Unfortunately three coat systems don’t perform well in Utah’s climate due to freeze-thaw conditions. Warm moist air is pushed ahead of cold fronts and produces rain, which is followed by freezing temperatures. By the time a cold front passes, a conventional three coat system is already saturated with moisture, and then it fractures and swells as the water inside freezes. This is why “conventional” stucco was not seen in Utah much.

The acrylic topcoat of a “one coat” system is designed to shed more water than the “cementation color coat” of a conventional three coat system (the kind of stucco that has been used in California for many years). But by its nature, this same acrylic top coat also holds more moisture anytime water penetration occurs. Excessive moisture is often held in the wood framing members behind what looks like a perfectly good stucco wall. 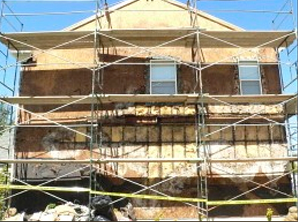 Dry rot that was hidden behind what was a perfectly good looking stucco system on an eight year old stucco home in Draper, Utah. An expensive, yet superficial rubberized coating was placed on this wall to repair a leak when the house was two years old.

Damaged structural framing members at the same home as shown in the photos to the left. Fortunately this damage was discovered before the triple micro-lam beam, shown in the center of the above photo, had to be completely removed. 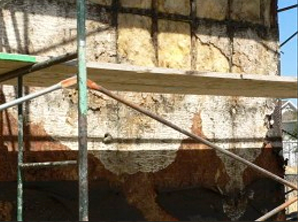 The yellow material between the studs is exposed insulation. We did not remove the plywood which used to cover the insulation. The plywood was consumed by organic parasites (molds and fungi) which thrived on the moisture that was trapped behind the failed stucco system.

STUCCO REPAIR OR EXTERIOR REMODELING QUESTIONS? PLEASE GIVE US A CALL.